Recognizable in today’s clipping is some normal BC Chinook Jargon. 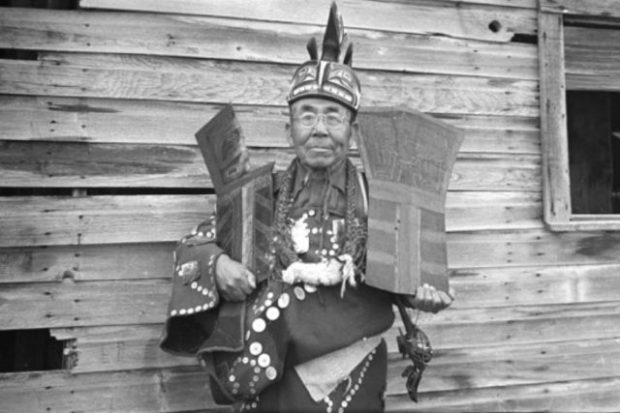 The detail I don’t quite grasp is why the reported potlatch by a Nanaimo (Vancouver Island) chief happened on the mainland’s Fraser River. Tribes on both sides of the water had close relationships, but my outsider understanding was that you’d potlatch on your home turf.

The spellings used in today’s article, and the fact that the CJ that’s used isn’t translated for the reader, suggest local folks knew Jargon well at the time — they didn’t have to consult published dictionaries.

The Colonist correspondent writes as follows in regard to the recent “potlatch” on the North Arm of the Fraser on Saturday:

Towards evening we were re-called to the settlement by Pilot Wiliam Brown of the Nanaimo tribe. Two thousand and fifty Indians were lined up in readiness for the unusual ceremony. Big Jim, of the Nanaimo tribe, is an orphan, his father, the chief of the tribe, dying many years ago. For a long time Big Jim has been saving “tehalete hi-uh chickamen” [2] for the purpose of giving a big potlatch and asserting his rights as heir apparent to the title of Grand High Tyee [3] of the tribe of Nanaimo. The potlatch is over now. Jim “Halo Weight Chickamen, stop still,” [4] though but yesterday a humble member of the tribe of red men, is, to-day, the aristocrat of the bluest blood, even if he hasen’t one nickel to rub against another. The dance was soon at white heat, dark painted figures going in, out and around for 55 minutes. The presiding klootchman [5] was prepossessing, and when the dancers became exhausted she went through the usual process of sprinkling them with cold water. When affairs got to such a pitch “somfin had to drop.” Down came blankets, goods and chattels, from aloft, where Big Jim was perched in a rather undignified position for a chief. The articles were fitted on poles and carried away by the tribe amidst great rejoicing.

Potlatch [1] is of course the word for an Indigenous ceremonial giveaway. After 25 years of research, I’ve still found scant evidence that it was a noun in Chinuk Wawa, though. Instead, it seems to be better characterized as a word borrowed from CW and used in a novel way in regional English. My reader Alex Code’s phenomenal memory for detail might provide the counter-evidence I’m looking for, though!

“Halo Weight Chickamen, stop…“ [4] = hílu wə́x̣t chíkʰamən stóp* = ‘there’s no more money / has no more money’. This “copula” word stop is quite common in BC Chinuk Wawa. I always hear British influence in it, do you? The quotation ends with the word “still”, which possibly was in use in BC CW as well; there were plenty of new English borrowings. But I’ve never found “still” anywhere (else) in genuine BC CW.

As I understand it, potlatches were already illegal under Settler law by 1892. That Canadian law is possibly the only in the world whose official language uses Chinuk Wawa:

“…every Indian or other person who engages in or assists in celebrating the Indian festival known as the ‘Potlatch’ or the Indian dance known as the ‘Tamanawas’ is guilty of a misdemeanour, and shall be liable to imprisonment.”