George B. McClellan (1826-1885) was a snotty privileged kid who went on to be a governor of New Jersey and failed Presidential candidate.

He can now be added to the pretty lengthy list of US Civil War officers who spoke Chinook Jargon.

This is because McClellan spent much of 1853 leading a survey expedition for a potential railroad route through the Pacific Northwest. There, as you’ll see today, he picked up plenty of Jargon.

Plus, one of his crewmembers was the highly respected Chinuk Wawa expert, George Gibbs, who is present for much of what follows.

We’ll find that McClellan really picked up quite a decent knowledge of CW.

We’ll also see that Jargon knowledge among Indigenous people in 1853 was most prevalent in the areas that had the most interaction with Euro-Americans, from Fort Vancouver up along the Columbia River. Individuals from tribes farther afield spoke it, for example certain Spokanes, but they seem to be exceptions.

As usual, I’ll try to flag words that I’m unsure of with asterisks*.

I’m not sure what language this word is from, or whether I’m transcribing it right — “The La-cust (uva ursi) abounds here, it is used by the Indians for kinna kanick.” But it sure sounds like Arctostaphylos uva-ursi, which is indeed used as a tobacco equivalent, i.e. CW kinikinik!

Talking with old Klickitat Chief Tow-e-tats, McClellan writes him a “recommendation or pass” (a.k.a. a skookum paper), and advises him that he should try to go in person when Territorial Governor Isaac I. Stevens comes in the springtime to negotiate treaties — “if not send some ‘tenas-tahi‘ + my note.” This is the widespread Chinook Jargon idiom tənəs-táyí ‘minor official, sub-chief, etc.’ that I’ve documented a number of times in the past.

McClellan notes traditional stories, surely told to him in Chinuk Wawa. “The Indians have various traditions about their origin — one is that they were made by a preceding race of very strong men called (“Sheyemmes*” Grizzly bears).” (The Jargon word, a.k.a. sháyum, is unclear to me in his handwriting; it looks something like Sheyennes.)

Being present in the warm season, McClellan is able to observe, “The camash root abounds, also the wap-a-too.” (These are (la)kámás & wáptʰu.)

He notices that many hilltops sport cairns, “several little heaps of stones, some ‘cultus,’ [kʰə́ltəs ‘for no purpose, for fun’] some indicating trails &c…Came suddenly in the camp of a sick Siwash — as he evidently had the small pox I said good morning quite rapidly.” This phrase “sick Siwash” is either intended to be completely Chinuk Wawa (sík sáwásh ‘an ailing Native person’), or just the second word is. No telling.

Around August 16, McClellan meets a number of important Indigenous leaders such as Yakama Chiefs Skloo and Kamiakin, and keeps reassuring them that any Settlers who come through their territories will just be headed to Puget Sound and will only want to buy cattle and potatoes from the Native people. He also assures them that when Governor Isaac I. Stevens shows up to make treaties with these tribes, he will speak nothing but the truth. Yikes! That’s different from what actually came to pass.

On August 22, McClellan stays up till 2 AM talking with Catholic missionary Father Pandosy, likely in French as McC. is a highly educated young man who has traveled to Europe. A guide who will come to take McClellan to Mt. Baker speaks Spokane Salish as well as Chinook.

At Camp No. 23 by a spring near Naches River, McClellan has a highly back-translatable “talk” with Chief Kamiakin. They touch on the differences between the British and the Americans, Americans’ expectations of the Yakamas, and more. All of this can easily be put back into the Chinuk Wawa that it occurred in.

On August 26, McClellan hires an Indigenous (Yakama?) woman who speaks “the Jargon” as an interpreter for his guide. It’s good that we keep on discovering what a big role women played in the Chinuk Wawa-speaking environment, somewhat contrary to received images of men bartering with each other.

On September 4 on the Yakima River, a Native man is engaged as guide to be paid with various clothing and “…other small icktas. Says that it is 3 days to the Tum-water. Bad road thro’ the pass — hyu lamataye* — wake hyu stick — hyu stone &c. &c.”
(íktas ‘things, valuables’; tə́mwáta ‘waterfall’; háyú lamotáy ‘lots of mountains’; wík háyú stík ‘not many trees’; háyú stún ‘lots of rocks’.)

He’s a decent artist and draftsman, and I wanted to show you this accurate depiction of an Indigenous fishing platform that he saw in use…

“A family of Indians (Sham-waw-patams*) [Sahaptins] here — they have no salmon — only a couple of suckers. They were at first unwilling to receive a small present I offered them, until they understood it to be a “cultus potlatsh.”
(kʰə́ltəs pá(t)lach ‘only giving’, expecting nothing in return.)

On September 17 in the “Kihtas*” area, “an old friend Katisoli*”, “a good old man”, doesn’t know Chinook but is very “desirous of being communicative”.

Quiltanee, a.k.a. Quiltani/Louis/Quiltame in following pages (Quiltenenock), the head chief of the Spokanes, “speaks Chinook well” … says the Shuswaps to the north are very bad … McClellan considers offering to go make peace between those 2 tribes! Soon after this conversation, though, Owhi explains that it was “ahn-cotti” that the Spokanes & Shuswaps were at war.
(ánqati ‘long ago’.)

In the September 21 entry, Chief Owhi tells a traditional story, mentions the “Chief Above” etc., all of which must have been in Chinuk Wawa. A separate conversation, with plenty more CW, goes into next frame. More back-translation is waiting to happen…

September 23 at “Wenatshapam” (Wenatchee) — apparently Native people are those racing “cuitans” here, some of whose apparent names are given as “beads” and “mocassins” [SIC] — CW names?
(kʰíyutən ‘horse’.)

September 26: Chief Louis of the Spokanes is insultingly characterized by McClellan as “the most cultus & contemptible Siwash we have yet met with.”
(kʰə́ltəs here meaning ‘worthless’; sáwásh ‘Native’.)

September 27 — At Fort Okanogan, “All the other people here are Indians & Kanakas…
(kʰanákʰa ‘Hawai’ian’.)

October 2 — On the Methow River, various kinds of salmon that run here seem to be what’s being described by McClellan as “t’cope-col-tenass &c. &c.”
(tk’úp ‘white’; kʰúl ‘winter’ or ‘autumn’ I infer, rather than the literal ‘cold’; ténas* ‘small’.)

“John describes the country beyond where Shtean* went as round* with small mountains, & thick brush & timber — that a man can ‘cultus clatawa’ every where almost — but from what I know of their idea of a ‘cultus clatawa’ I should be lothe [SIC] to believe that it indicated a passable country.”
(kʰə́ltəs ɬátwa ‘casually go’.)

October 5, at the Okanogan River — “…some of the band were carrying down the ichtas in 3 canoes”)
(íktas ‘belongings, supplies’.)

“When about to take observations last night (5th) Chron[ometer] 7613 proved to be ‘kock-shut‘ — the chain unwound &c. — When will bad luck cease?”
(kákshit ‘broken, out of order’.)

Entry of October 9: “There is a village near the gorge below here; the Chief declined receiving tobacco at present — of this more anon. His name is ‘King George’ — a cultus looking specimen, & his people no better. The acting brevet, le plete’ stopped us by his house, & indulged in a series of guttural shouts, accompanied by waving of the arms &c. — This, we were informed, was ‘wa-waing’ the ‘Sahali tahi‘ invoking blessings on our heads, as being the first Boston tilicum that had ventured in this part of the land.”
(kʰinchóch ‘British’; kʰə́ltəs ‘worthless’; liplét ‘priest’; wáwa ‘talk to’; sáx̣ali-táyí ‘God’; bástən tílixam ‘Americans’.)

October 11 — Okanagan Chief Pierre gets talking in CW; again, great material for a back-translation. Some CW words are recorded here, “Sahali tahi” and “ancotti kakwa moossum”. The idea of his talk is to cast doubt on the trustworthiness of “King George & his tilicum” mentioned above, to get the White visitors to favor Pierre’s tribe instead.
(ánqati kákwa músum ~ ‘long ago like sleeping’, the exact intented meaning isn’t clear.)

On October 12, a Native messenger arrives with news of an unidentified disease outbreak among Owhi’s people. “He says that the Priest [Father Pandosy?] says it is ‘hyas masachi’, & is ‘hyas quoss’ — not knowing what it is we can afford no relief. He came up in hopes of getting some medicine from me. I gave all the consolation in my power, & tried to allay their fright. What will become of these poor savages should some other scourge rage among them? As one of them said last night there will soon be ‘halo Siwash’.”
(hayas-masáchi ‘ferocious’, hayas-k’wás ‘very afraid’, hílu sáwásh ‘no Native people’.)

October 21 at Fort Colville — Governor Isaac I. Stevens gives a speech to assembled Native people, presumably about the upcoming treaty negotiations, and it’s “imperfectly interpreted — it elicited several grunts. The Priest modestly offered to be the medium of communication with the Indians.”

At the Walla Walla River on November 7, McClellan offers lukewarm praise of the landscape — “The soil presents the appearance of fertility — it must be a mere ‘pis aller’ [last resort] — ‘faute de mieux’ [for want of anything better] — ‘tenas close’ &c.”
(tənəs-ɬúsh ‘sort of good; a little better’.)

I can’t resist noting McClellan’s use of a classic North American French phrase in arid Umatilla country on November 9: “Roche got some scrapped tent forks somewhere — I picked up a freak piece of drift wood on the shore, & between that & the ‘bois de vache’ Jim will manage to cook our supper.” Meaning literally ‘cow wood’, bois de vache is that classic frontier fuel, cow chips, probably from passing Settler immigrant convoys! 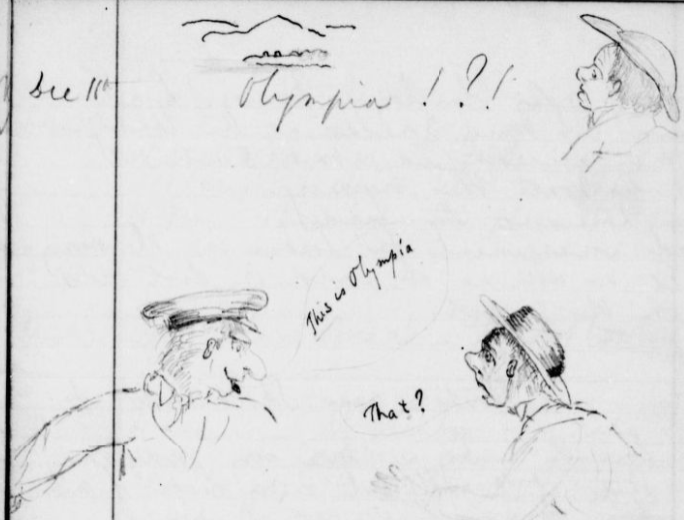 A cartoon of an unimpressive new frontier town, from a back page of McClellan’s 1853 diary

Besides Chinook Jargon, there’s some neat linguistic information in these diaries on the Indian names of the 1st through 4th Plains in the Fort Vancouver area…

Another plain near First Plain was named < Alack-ae > ‘turtle place’. All of these Plain names would appear to be Klickitat (Northwest Sahaptin); I definitely recognize this last one as resembling the Sahaptin for ‘turtle’.

McClellan also tells about “Chelatcha” (Chelachie) prairie being named for a long grass there, but it’s an excellent match for Cowlitz Salish ‘brake fern (upper part)’. I also suspect the place name “Yacolt” near it of being Salish; local tradition says it means ‘haunted place’ due to a disappearance of some kids, and it resembles the Cowlitz form for ‘move away’. Neither is listed in the place names appendix of MD Kinkade’s 2004 dictionary of Cowlitz Salish, nor in his 1997 research paper on that language’s toponyms.

One thought on “1853: George B. McClellan’s PNW railroad survey diary”