Thanks to Sam Sullivan for this news clipping from the late frontier era.

“The Assizes” column in the Victoria, BC newspaper reports on a murder case just tried in court.

The defendant was reported to be named Lahk-is-si-my, a “Euclataw”, that is, from the Ligwilda’xw group of Southern Kwakwaka’wakw. He was charged with the murder of a Fort Rupert Indian (from the Kwakiutl First Nation at the northern tip of Vancouver Island).

There was some dispute in the courtroom over “the Fort Rupert klootchman interpreter” (ɬúchmən ‘woman’). I wonder if the objections may have had to do with the dialect differences between northern and southern Kwakwaka’wakws. This woman may have been putting Native witnesses’ Kwak’wala into English or Chinook Jargon, or their CJ into English. I would guess Kw > CJ, but until comparatively late in the frontier era, it seems Kwakwaka’wakws used less CJ than most other Vancouver Island people.

A series of unsuccessful workarounds was tried, with another woman being brought in to check the first translator’s work, and with witnesses being made to interpret for each other. There too, we can’t be sure whether they were trying to interpret Kw > CJ, > English, or both.

Finally a Sergeant Bloomfield was enlisted for this duty, but with only “partially successful” results. This detail is helpful. We can assume he was a Settler, so he probably didn’t know any Kw, whereas his knowing CJ would be unremarkable. It was common in BC courts at that time to provide CJ interpreters. Despite this, Bloomfield’s interpretation didn’t go so great, so that would seem to reinforce our guess that the Native folks testifying didn’t know a lot of Jargon themselves. (Not to mention that it sounds like they weren’t all being very cooperative!)

Read and judge for yourself: 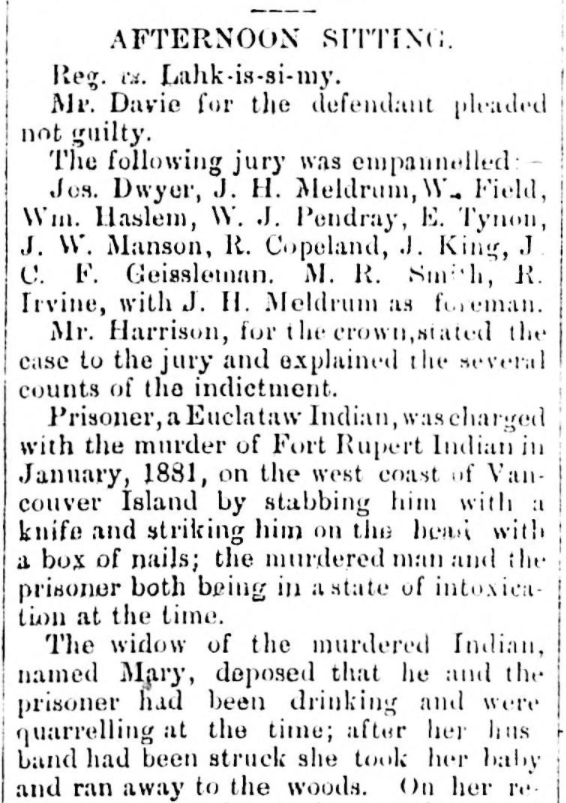