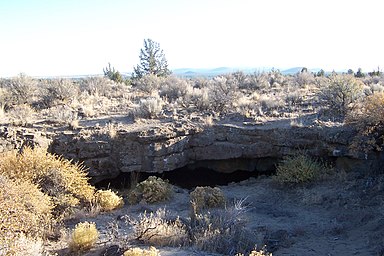 The Horse Lava Tube System, near to and associated with Klawhop Butte (image source: Wikipedia)

…which is the title of a classic piece of the state’s scholarship written by Lewis A. McArthur, published originally in 1928.

Notwithstanding its venerable status, we’ll be continuing our trend of improving the understanding of a number of place names in it.

We read about Kaleetan ‘arrow’ Butte on page 400, near Devils Lake in Deschutes County, central Oregon. Presumably named by a Forestry Service employee, and based on a misunderstanding of some Anglophone-oriented printed source’s < kaliton >, etc., representating kaláytən. Compare Kaleetan Peak in Washington state, known from 1908.

Tangentially related to the Jargon is Jawbone (page 408), the former name of the locality of Kilchis Point in Tillamook County; “a sawmill enterprise was built on ‘jawbone’ when no cash was available” circa 1872. This English slang word is extremely common in BC Chinuk Wawa for ‘debt; loan; etc.’

With Kiwa ‘crooked’ Butte on page 413, we have another of the many Deschutes County land features given Chinook names by some government employee after the frontier era. Modern Grand Ronde spelling: q’áyʔwa.

Klak ‘cut(-)off’ Butte on page 414 is another such; modern spelling ɬáq. The word is more accurately translated ‘removed, off’, without any connotation of cutting or truncation. That is, it can mean ‘cut off’ only in the sense of ‘isolated’; McArthur is erroneous in saying it’s called “cut off, indicating its shape”.

Page 416’s Klawhop ‘hole’ Butte is an addition to this set of Deschutes Co. names. It is said to have a volcanic crater at the top. Modern spelling: ɬxwáp. I bet the locals pronounce it “claw-hop”!

We find a greater variety of naming on page 417. Kloan ‘three’ in Wasco County was the Oregon Trunk Railway’s “third station from the north end of the line”. Klone Butte uses a variant spelling of this, for another place in Deschutes County. Modern spelling: ɬún.

Kloochman ‘woman’ Creek is evidently a renaming from an earlier Squaw Creek, if I read McArthur right. This is in Crook County. Modern spelling: ɬúchmən.

Even more variety occurs on page 419, where we find Koosah ‘sky’ Falls in Linn County, seemingly a government-given name. Koosah Mountain in the Cascades Range in Deschutes and Lane Counties likely shares such an origin. Modern spelling: qúsax̣.

Kotan ‘horse (?)’ in Klamath County is reported to be a version of CW kíyutən, so maybe it was originally spelled Kutan on some handwritten document. I might remotely suspect < koten > ‘squirrel’ from the old Demers-Blanchet-St. Onge 1871 dictionary, k’áwtin in modern spelling, but that’s a mighty obscure word!

Kweo ‘ring’ Butte on page 420 is also in Deschutes County; it’s a revisionistic oddity, because this fairly common CW word is only known in reduplicated form, modern k’úyk’uy!

Kwinnum ‘five’ Butte is still another Deschutes County official name, the fifth in a series of numerically named prominences. Here McArthur explicitly says it was the US Forest Service (founded 1905) that gave the name. Modern spelling: qwínəm.

Kwolh ‘aunt’ Butte is in that same vicinity; modern spelling kʰwáɬ. Of related interest are the nearby Cascade Range features Tot ‘uncle’ Mountain (modern tʰát), Bachelor Butte, The Husband, and The Wife.

← Is qʰə́nchix̣ ‘when’ from Chinookan ‘how much (time span)’ ?
Reinforcement of the Indigenous metaphor BIRD : FOOL? →