The folklore behind an Indigenous place-name is Whitemansplained; some excellent Chinuk Wawa emerges from the layers of fiction and lavish illustrations.

(By the way, a few pages earlier in the same magazine is a poem “Memaluse Island” by an Oregon poet, if you’re inclined to surf over for some regional literature about < Memaloose Illahees >.)

Romantically claimed to mean ‘wings of the wind’ and, of course, to have been the name of a gorgeous Indian princess, Washougal’s origin story is relayed by a young male Settler from a supposed 120-year-old Indigenous elder.

(“Washougal”the name of a place just east/up the Columbia River from Fort Vancouver, is elsewhere claimed to mean ‘rushing water‘, but I’d like to try figuring out its literal Kathlamet Lower Chinookan meaning independently. I’ve only found Kathlamet i-kíš-ačk ‘cascades’ and Shoalwater-Clatsop i-á-x̣ak-ačk ‘its [the river’s] cataract’.)

The Chinook Jargon used sparingly in this story is spelled in a way unique to this author, and the pronunciation & phrasing of it lead me to conclude that, even though it’s paradoxically fictional, it’s the real lower Columbia stuff.

The Settler source here, like so many frontier-era Whites, calls Jargon ‘their tongue’, but also distinguishes ‘the pure Indian’ language which is likely to be Salish at such a late point in contact history.

“…The only way she reckoned time was by the snows. She was said to be 120 “coolilihees” old. In their tongue a snow or “coolilihee” [kʰúl-íliʔi, literally ‘cold-land’ = ‘winter’] is a year and as some of the winters in Washington pass without snow, it is likely she was even older than reported.”

The chief was named “PiahLook” [perhaps includes páya, CW for ‘fire’] and gained great popularity on account of his daughter whose beauty was known throughout the bounds of the present state.

“One dusky young chief from the North, named ‘Wild-Cat,’ [wáyl-kʰát is a known phrase in various CW dialects] with a romantic strain of blood in his veins, called his trusted band of warriors to his tepee’ and delivered his oration, substantially thus: …”

“…Those who will do so, please signify by saying ‘aye’ in a clear tone of voice, and each I shall endow with twenty of my best ‘cuitans.’ ” [kʰíyutən ‘horse’] “With a hundred throated ‘aye’ they registered their approval, and at once set up a supplementary yell of ‘Hiugh michlight nesika tillicum,’ which being translated, means ‘Long live our emperor.’ [háyú/hayu-míłayt nsayka tílixam ~~ ‘our relative will live a lot’] 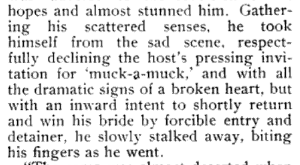 Gathering his scattered senses, he took himself from the sad scene, respectfully declining the host’s pressing invitation for ‘muck-a-muck,’ [mə́kʰmək ‘food’] and with all the dramatic signs of a broken heart, but with an inward intent to shortly return and win his bride by forcible entry and detainer, he slowly stalked away, biting his fingers as he went.

“Before old Piah-Look could gather his men for pursuit, the kidnappers had a considerable start and were Soon across the ‘Hiac Chuck,” [(h)áyáq chə́qw ‘fast water’] the present Washougal river.”

“That their reckoning of time must be about correct is evidenced by the fact that all the trees that were burned down by the ‘great fire’ are decayed and another growth has sprung up large enough for saw logs and are known by lumbermen as ‘second growth.’ To attain the size of some of these trees would take at least one hundred years, so I think the old crone’s testimony is the truth. She could speak no English, so I learned the Chinook and a smattering of the pure Indian [maybe Lower Cowlitz Salish], and was always greatly interested in her tales of adventures and the condition and history of the country long before white settlement. She had stories handed down from generation to generation that must have originated three hundred years ago.”