1914: City Puts on Its Gay Duds for Potlatch

It’s hard to find many Pride-related topics in old newspapers, so I’ve settled on this one.

Feel free to appropriate it. Today’s whole article is replete with ironies 🙂 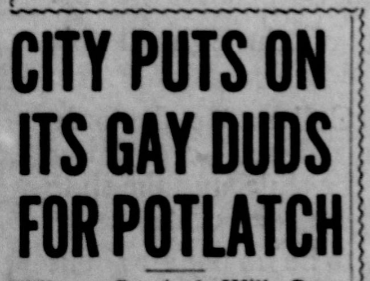 It’s another of the fun-loving Seattle Star‘s promotions of the yearly “Tilikum Carnival”: 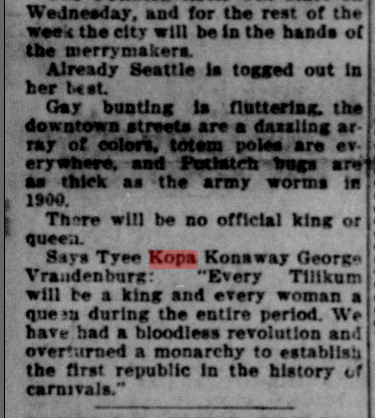 CITY PUTS ON ITS GAY DUDS FOR POTLATCH

Celebration Proper Will Be Observed Last Four Days of the Week.

The big Tilikum Potlatch carnival, opening tonight at Third av. and Lenora St., will be rendered famous by the barkers at the entrances. There will be all sorts of attractions, supplemented by countless lights and lots of music — and it will last the whole week.

The Potlatch itself will start on Wednesday, and for the rest of the week the city will be in the hands of the merrymakers.

Already Seattle is togged out in her best.

Gay bunting is fluttering, the downtown streets are a dazzling array of colors, totem poles are everywhere, and Potlatch bugs [enthusiasts] are as thick as the army worms in 1900.

There will be no official king or queen.

Says Tyee Kopa Konaway George Vrandenburg: “Every Tilikum will be a king and every woman a queen during the entire period. We have had a bloodless revolution and overturned a monarchy to establish the first republic in the history of carnivals.”