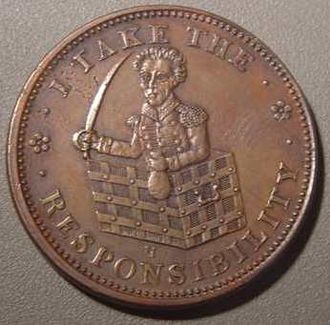 “I take the responsibility”: a jab at the president, on a Hard Times token (image source: Wikipedia)

Dur, as an adjective, translates into English as ‘hard [the physical property of resistance]; hard [metaphorical]’. As a French adverb, it’s ‘diligently’ as in ‘to work hard’.

The Confederated Tribes of Grand Ronde 2012 dictionary of Chinuk Wawa defines tʰil as ‘tired; weak’ and as ‘heavy’.

The two authorities’ definitions are different!

CTGR 2012 goes on to give an airtight etymology in Chinookan-language particles that mean ‘tired all over, weak’.

Do those particles also cover ‘heavy’ and ‘hard/difficult’?

So, no, Chinookan languages only employ tʰil forms as ‘tired, weak’; they use other forms for ‘hard’.

I suspect the natively French-speaking Father Lionnet folk-etymologized tʰil as being from French dur, since he’d be keenly aware of all the Chinook Jargon words from that language. I’ll carefully point out to you, though, that it’s unlikely French was the source of the word. We’d expect the first consonant to wind up differently, as unaspirated t or voiced d, in CJ. And the meanings are out of alignment. So there’s no need to look beyond Chinookan for a source.

Of the preceding, only Shoalwater-Clatsop demonstrably has the metaphor HARD (PHYSICAL PROPERTY)::DIFFICULT, and it’s one possible source of the same metaphor in Jargon. Obviously English also uses that metaphor, so, good luck attempting to pick a single source! And, who knows, maybe the chain of inspiration went from English to Chinuk Wawa and then to Lower Chinookan?

But the metaphor TIRED::HEAVY looks to be endogenous to (i.e. original in) Chinuk Wawa. (And endogenous CW may hint at the early-creolized stage of the languge — a hypothesis of mine that will be developed in further posts here.) There’s no clearly plausible model for it in any of the parent languages, whether Indigenous or European.

Because, the Chinookan ‘heavies’ turn out to be harder, er, tougher, er, more difficult to find, but the few instances I located use totally different roots from the ‘tired’ & ‘hard’ words:

By the way, ‘hard, diligently’ is skúkum in all dialects of Chinuk Wawa. That word also means ‘healthy, strong’, and I’m using this opportunity to encourage all of you to remain skukum.

I should note at least briefly that I see no similar-sounding ‘hard / difficult’ words, and few corresponding metaphors, in the Southwest Washington Salish languages that also played a big role in forming CW. The one relevant idea is ‘hard [physical property]’ ~ ‘difficult’, which quite interestingly gets expressed by a pair of roots that are “metathesized” versions of each other! That is, I think they’re examples of the frequent Salish historical phenomenon of reversing the consonants in a root, giving us in this case x̣aƛ̓ <=> ƛ̓əx̣(ʷ). (In the Grand Ronde-style alphabet that a lot of my readers are familiar with, that’d be x̣at’ł <=> t’łəx̣(w).)

An extended usage you might want to learn, just about now:

Starting with Granville Stuart 1865, whose data I’ve previously shown to be early-creolized / Grand Ronde style, we find a verbal expression mamuk-tʰíl for ’cause trouble’, literally ‘to tire (someone) out’. This goes on to show up quite a bit in British Columbia, and by the 1890s we see a common BC noun phrase tʰíl mámuk ‘trouble; mayhem’, as if to say ‘heavy work’ or perhaps in an extension of the adjective’s meaning, ‘tiresome work’.

I feel another good translation of tʰíl mámuk is ‘hard times’! What a useful expression as you practice speaking Chinuk Wawa during your social isolation…

PS: I don’t yet know how to say ‘difficult’ or ‘easy’ in BC Jargon, but when I speak it, I tend to steal tʰíl and wik-tʰíl from this compound…

PPS: Speaking of speaking Jargon while stuck at home, there are a couple of groups meeting via Zoom. I will try to gather info so you can contact them if you’re interested!

← A Salish etymology for ‘aphrodisiac’
How did it come to happen that ‘happen’ came from ‘come’? →