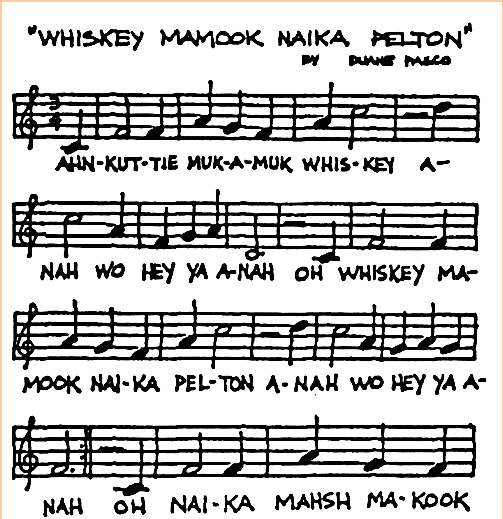 Uncovering another stealth loan that streaked past previous researchers…

Historically, a problem has been the shift away from all-handwritten documentation in the 1800s. In cursive! In some made-up variation on English writing!

Around 1900 it became possible to neatly type up your “field notes”.

Anthropologists and linguists also gradually shifted to a tradition of carefully, separately writing each letter of a word they were recording in scientific phonetic alphabets.

A byproduct of these shifts: we got used to reading data with spaces between the letters, and less good at reading cursive handwriting.

Even extremely educated scholars found themselves laboring under this difficulty.

One example, I’m thinking, is a rare Upper Chehalis Salish synonym for ‘naked’.

M. Dale Kinkade was unquestionably the world’s expert linguist when it came to Upper Chehalis. And yet I’m thinking he had some trouble with this item.

Dale’s 1991 dictionary shows an older documented word for it as < Heûʹs-e-tûm >. This word, quite different from the modern Upper Chehalis way of saying ‘naked’, is credited to Rev. Myron Eells, who took down a lot of valuable information on several Washington State languages. But Eells was more of an impressionist than a scientist, when it came to language. His “ear” missed many of the sound contrasts made in Indigenous languages. And his way of writing their words (yes, in cursive, and as if they were English) was kind of unpredictable.

On top of all this, < Heûʹs-e-tûm > is found just once in our records of Upper Chehalis. So we can’t check it against other known versions.

I suspect Dale had a hard time reading this word in Eells’ notes. For one thing, he filed it under words starting in /x̣/, in his dictionary — he knew Eells’s letter “h” could stand for a variety of sounds.

And I suspect what Eells’ word represents might actually be partly Chinuk Wawa, in addition to being modeled on a CW phrase (Eells was likely asking in Jargon for words in UCheh.) :

Upper Chehalis expressions meaning ‘no ___, none of ___, without ___’ are indeed formed with a negative (natively táy) plus this s- prefix, then the main stem. Examples include:

(This tay is also used to form the expression ‘without testicles; priest’!)

Do you find this view believable?