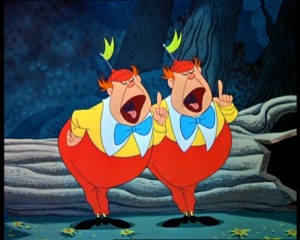 It’s often been remarked that Chinook Jargon has lots of repetition, which has seemed strange to English- and French-speakers.

There are plenty of words that you can’t say without repeating yourself, like pílpil ‘blood’ and tə́mtəm ‘heart; think’. These have been commented on by writers since the earliest days of the Jargon.

In the Grand Ronde creole dialect, there are optional but frequent repetitions too, like nánich-nanich ‘carefully examine; stare at’ (from ‘look’) and ayáq-ayaq ‘repeatedly; (too) often’ (from ‘quickly’). This second type has not been so much noticed in the historical or linguistic literature; I think not till Melville Jacobs’ 1920s-era work did any scholar explicitly acknowledge its existence.

But this “productive reduplication” as a grammatical operation existed long before that.  We already see it in Gibbs’ 1863 dictionary, e.g. < klimmin-klimmin > ‘soft; fine in substance’. (Gibbs describes this as a “diminutive” reduplication, but given the dependence of linguists on Greco-Latin models in that era, that’s about the best he could’ve done.) Father St. Onge’s dictionary manuscript of 1892, based on circa 1870 usage in the lower Columbia River region, provides many examples that are relevant, such as k̂ow-k̂ow ‘tangle’ (from ‘tie(d)’) and kwan-kwan ‘glad’ (from ‘gentle, mild’).

Starting quite early (like other morphemes I’ve been discussing here recently), this operation had a consistent “distributive” meaning. That means (in short) that it gave a word an added sense of occurring in multiple instances. For a little more on that, see Anthony Grant’s book chapter, “Reduplication in Chinook Jargon (Chinuk Wawa)” (2003).

And the words that can be reduplicated in this way have been of a consistent nature: verbs, adverbs, and adjectives, but never nouns. For my linguist readers, arguments could not undergo Distributive reduplication, but any (potential) predicate was a licit base for it.

(Note, in Grand Ronde Chinuk Wawa as in other Native languages of the region, ‘where?’ can be a verb, thus GR CW qʰá-qʰa ‘everywhere’; and adjectives and adverbs can be stative predicates, thus GR CW hayash-hayash ‘big ones’ and the above-mentioned ayáq-ayaq.)

We can ask what is the “etymology” of Distributive reduplication. While it’s not a word or morpheme that you can look up easily in a dictionary, I want to emphasize its close correspondence with the only commonly used reduplication in southwest WA Salish languages (one of which is our “usual suspect”, Lower Chehalis). In Grand Ronde CW, I see the form of this morpheme as an unstressed full-root copy postposed after the base form. Compare that with SW WA Salish “repetitive/intermittent action” root reduplication, said to be -CVC (suffixed unstressed copy of a consonant-vowel-consonant sequence in the root), in languages where the typical root is in fact a CVC shape — thus tending to be a full-root copy as in Jargon.

(For a little more about the widespread phenomenon of Salish CVC reduplication, the technical-minded among you might value Czaykowska-Higgins and Kinkade (1998:27) and Van Eijk (1998), which will be found at that same link.)

In fact, note that SW WA Salish languages have a number of longer (CVCVC) roots which reduplicate as -CVCVC, such as Lower Chehalis čəpáx̣-čəpax̣ for ‘lightning flashing intermittently’.  This argues for a more accurate definition of this Salish reduplication as simply “full-root” (as at Grand Ronde), rather than a specified template of consonants and vowels.

And in SW WA Salish as in GR CW, this productive reduplication is not used on nouns (e.g. to make plurals), but only on words inflectable as verbs.

To my understanding, Chinookan-language reduplication was largely confined to the onomatopoeic ideophones (which provided many of the original words of the Jargon). I haven’t noticed it occurring with inflected words, nor in the distribution of syntactic (word) classes found in both SW WA Salish and creole Jargon. Nor am I aware of closely comparable reduplication in other regional languages, but I welcome my readers’ input about that, and I intend to examine e.g. K’alapuyan and Sahaptian languages.

I’ve got kids at home, released early from school, so concentrating on today’s post has been a challenge 🙂 But I think I’ve put across my suggestion that we can trace the inspiration of Grand Ronde grammatically productive reduplication to local Salish languages.