A colorful firsthand telling of a dangerous scene by a girl who lived through it, to recount it in the fullness of her age.

“This was about 1854”, Mrs Parker says, and she provides all the translation you need: 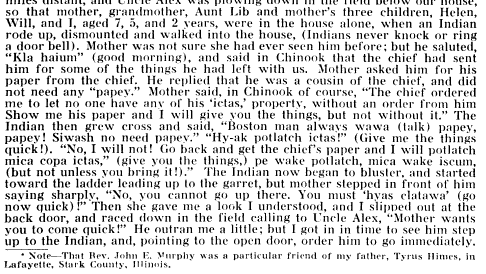 Father had ridden to La Fayette, the county seat, six miles distant, and Uncle Alex was plowing down in the field below our house, so that mother, grandmother, Aunt Lib and mother’s three children, Helen, Will, and I, aged 7, 5, and 2 years, were in the house alone, when an Indian rode up, dismounted and walked into the house, (Indians never knock or ring a door bell). Mother was not sure she had ever seen him before; but he saluted, “Kla haium” (good morning), and said in Chinook that the chief had sent him for some of the things he had left with us. Mother asked him for his paper from the chief. He replied that he was a cousin of the chief, and did not need any “papey.” Mother said, in Chinook of course, “The chief ordered me to let no one have any of his ‘ictas,’ property, without an order from him. Show me his paper and I will give you the things, but not without it.” The Indian then grew cross and said [in a Jargon-pidgin English mix? DDR], “Boston man always wawa (talk) papey, papey! Siwash no need papey.” “Hy-ak potlatch ictas!” (Give me the things quick!). “No, I will not! Go back and get the chief’s paper and I will potlatch mica copa ictas,” (give you the things,) pe wake potlatch, mica wake iscum, (but not unless you bring it!).” The Indian now began to bluster, and started toward the ladder leading up to the garret, but mother stepped in front of him saying sharply, “No, you cannot go up there. You must ‘hyas clatawa’ (go now quick)!” Then she gave me a look I understood, and I slipped out at the back door, and raced down in the field calling to Uncle Alex, “Mother wants you to come quick!” He outran me a little; but I got in in time to see him step up to the Indian, and, pointing to the open door, order him to go immediately. 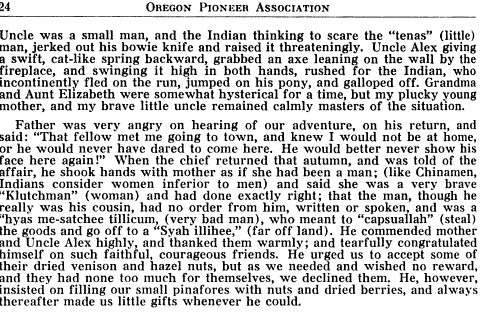 Uncle was a small man, and the Indian thinking to scare the “tenas” (little) man, jerked out his bowie knife and raised it threateningly. Uncle Alex giving a swift, cat-like spring backward, grabbed an axe leaning on the wall by the fireplace, and swinging it high in both hands, rushed for the Indian, who incontinently fled on the run, jumped on his pony, and galloped off. Grandma and Aunt Elizabeth were somewhat hysterical for a time, but my plucky young mother, and my brave little uncle remained calmly masters of the situation.

Father was very angry on hearing of our adventure, on his return, and said: “That fellow met me going to town, and knew I would not be at home, or he would never have dared to come here. He would better never show his face here again!” When the chief returned that autumn, and was told of the affair, he shook hands with mother as if she had been a man; (like Chinamen, Indians consider women inferior to men) and said she was a very brave “Klutchman” (woman) and had done exactly right; that the man, though he really was his cousin, had no order from him, written or spoken, and was a “hyas me-satchee tillicum, (very bad man), who meant to “capsuallah” (steal) the goods and go off to a “Syah illihee,” (far off land). He commended mother and Uncle Alex highly, and thanked them warmly; and tearfully congratulated himself on such faithful, courageous friends. He urged us to accept some of their dried venison and hazel nuts, but as we needed and wished no reward, and they had none too much for themselves, we declined them. He, however, insisted on filling our small pinafores with nuts and dried berries, and always thereafter made us little gifts whenever he could.

This particular pioneer clan evidently cultivated some good relationships with the local Indians. So, later in the memoir, Mrs Parker is able to make some enlightening general observations about settlers’ and Indigenous people’s attitudes toward the tribal languages in contrast with English and with the pidgin, Chinook Jargon: 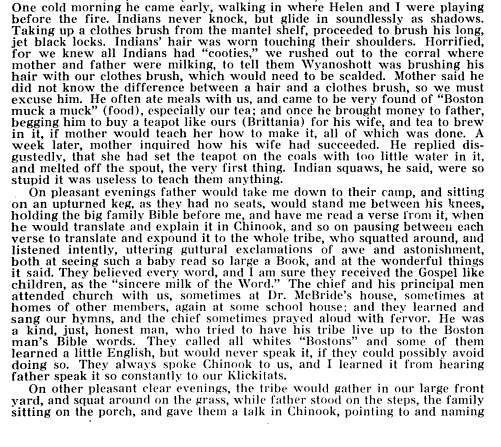 A migratory tribe of Indians, “The Klickitats,” who had habitually camped winters in that neighborhood sought and obtained father’s consent to camp on his land by our creek. They went into the coast range, between our ranch and the Pacific Ocean every summer, gathering and drying berries, and the meat of game they killed, deer, elk, and bear being then plentiful. They made us no trouble, being entirely amenable to my father’s every wish and instruction. He had already learned the Chinook, a simple language created by the Hudson’s Bay Co. as a means of communication between themselves, and all the tribes of Oregon savages. For it was useless to try to learn the native languages, since every tribe spoke a different tongue. So it happened that Helen and I, that first winter in our own home, had only little Indians to play with, our white neighbors being too far off for such young children to walk. Unable to speak their jargon, and they having none of our “Boston” talk, we still had quite jolly times with them, learning their funny little games, and they ours. They were very gentle, amiable little creatures, much like kittens in their frolics.

The Indians, especial Wy-an-a-shut. the chief, were often at our house. One cold morning he came early, walking in where Helen and I were playing before the fire. Indians never knock, but glide in soundlessly as shadows. Taking up a clothes brush from the mantel shelf, proceeded to brush his long, jet black locks. Indians’ hair was worn touching their shoulders. Horrified, for we knew all Indians had “cooties,” we rushed out to the corral where mother and father were milking, to tell them Wyanoshott was brushing his hair with our clothes brush, which would need to be scalded. Mother said he did not know the difference between a hair and a clothes brush, so we must excuse him. He often ate meals with us, and came to be very found of “Boston muck a muck” (food), especially our tea; and once he brought money to father, begging him to buy a teapot like ours (Brittania) for his wife, and tea to brew in it, if mother would teach her how to make it, all of which was done. A week later, mother inquired how his wife had succeeded. He replied disgustedly, that she had set the teapot on the coals with too little water in it, and melted off the spout, the very first thing. Indian squaws, he said, were so stupid it was useless to teach them anything.

On pleasant evenings father would take me down to their camp, and sitting on an upturned keg, as they had no seats, would stand me between his knees, holding the big family Bible before me, and have me read a verse from it, when he would translate and explain it in Chinook, and so on pausing between each verse to translate and expound it to the whole tribe, who squatted around, and listened intently, uttering guttural exclamations of awe and astonishment, both at seeing such a baby read so large a Book, and at the wonderful things it said. They believed every word, and I am sure they received the Gospel like children, as the “sincere milk of the Word.” The chief and his principal men attended church with us, sometimes at Dr. McBride’s house, sometimes at homes of other members, again at some school house; and they learned and sang our hymns, and the chief sometimes prayed aloud with fervor. He was a kind, just, honest man, who tried to have his tribe live up to the Boston man‘s Bible words. They called all whites “Bostons” and some of them learned a little English, but would never speak it, if they could possibly avoid doing so. They always spoke Chinook to us, and I learned it from hearing father speak it so constantly to our Klickitats.

On other pleasant clear evenings, the tribe would gather in our large front yard, and squat around on the grass, while father stood on the steps, the family sitting on the porch, and gave them a talk in Chinook, pointing to and naming the planets and constellations, and telling all about the sun, moon and earth, and in short, telling in simple terms, all we know of their sizes and stupendous distances from us, how they swing in their orbits, never missing a second or a cog in their movements in a thousand years. The poor fellows would groan, rock themselves back and forth, exclaiming, “tsuh! tsuh!” and even shed tears.

(I don’t know if this “tsuh! tsuh!” is to be considered Klickitat [Sahaptian], Yamhill K’alapuyan, or a new addition to our knowledge of Chinook Jargon.)

Mrs Parker’s memoir is an excellent read — click to go and take the whole thing in.