Kinbasket’s “Columbia River Shuswaps”, a railroad surveyor, and the Jargon 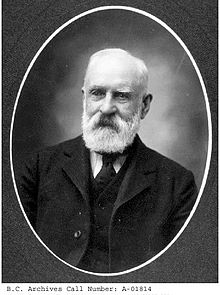 “The Rocks and Rivers of British Columbia” by the engineer/surveyor Walter Moberly (London: H. Blacklock & Co., 1885.)

This is the sort of old Northwest book that’s not quite crammed full of the stuff a Chinook Jargon student wants to find, but that delivers pretty good when you go over it with a fine-toothed comb.

Among the nearly inevitable typos in a book set to type from a manuscript that contains words unfamiliar to British people, I admire the sensibility of page 95’s “a murkey (a swamp)” in the context of Alberta’s Yellowhead country.  “Muskeg” was certainly what Moberly had written!  Other trip-ups that might get in the way of casual readers and historical researchers, both, are “Jeaknis” (Cheakamus) River, “Lillovet” (Lillooet), “Okawajau” (Okanagan) Lake, “Kootami” and “Kootanie” (Kootenay), and “Shemilkomean” (Similkameen). “Qutter” Creek escapes me for the moment.

But this here is a real solid memoir of experiences in 1860s BC.  Cool backstory, too.

In the old country er Ontario over the span of 1854-1858, Moberly happens to befriend none other than the illustrious frontier documentary painter, Paul Kane.  (Whom I forgive for his “Clark, how are you” gaffe.)

And Sir George hooks him up with that era’s version of a direct office phone number, a letter of introduction to HBC BC honcho James Douglas.

In search of gold, therefore maybe in 1858, Moberly embarks for the Pacific Northwest via Brazil, on a ship that also carries a utopian community of “free love” emigrants from Ohio whose “language to each other was certainly not parliamentary”, and down his nose at whom he claims to look.  Having admired the “tall and well-formed negresses” of Rio de Janeiro and “engaged such of the Peon damsels as we could pick up” to party with in Chile, there he first notices the “graceful South American dance–the Zemba Queca” (samba).  &c.

Having resolved some complications at San Francisco, Moberly works his way aboard a steamer to Victoria.  Once there, he is immediately offered a government job by Sir James–immediately declined–and is introduced to judicial boss Matthew Begbie, native British Guianese HBC bigwig and Douglas son-in-law Mr. Dallas, HBC bigwig and Douglas son-in-law Mr. Helmcken, recent arrival and childhood buddy of Dallas’s Donald Fraser, etc.  (A who’s-who of modern Victoria street names!)

Once on the mainland, Moberly develops the impression that the big Indian houses are called “rancheries” — the word is usually understood to mean Native villages. He proceeds from Harrison Lake, portaging and winding up at Bridge River.  The country is swarming with gold-hunters, one of whose main foods is “slap jacks”, that is pancakes, flapjacks.  (The existence of a form starting in s- might help explain the loanword lepchek in Sliammon Salish, but that’s a digression here.)

On return to Victoria (is this now 1859?), Moberly winds up working for Barbados native and former lieutenant-governor of the Falkland Islands, Colonel R.C. Moody, and promptly founds the city of Queensborough, later called New Westminster.  On page 30, we learn of the sardine-like Oolahan (eulachon) fish.

The use of this word suggests that our author is already using Chinook Jargon, and we soon have confirmation.  In Skwxwú7mesh country (Squamish Salish; the link takes you to Khelsilem, who will teach you how to pronounce this), Moberly runs into a previous acquaintance, a Native man who on page 32 points out hyas salmon (there’s a big salmon) in the river.

By the summer of 1865, exploring eastward for a railroad route through the Rockies, Moberly definitely understands and uses Chinook Jargon, seemingly with Sewepemc people.  He notes it down accurately from Native people’s usage.  Page 40 has his crew launching down the upper Columbia River when “the Indian boy in the bow…suddenly exclaimed ‘Wake closhe chuck,–konaway nameluce,’ which is ‘bad water–all will be killed’ “.

On page 46 a Native employee, Delina, points out ” ‘I see bear; Hyas bear,’ the latter meaning a big or grizzly bear.”  This animal by page 47 is chasing the men as Delina shouts ” ‘Hyah clattawa’ (Quick–clear out, or run)”.

In 1866 Moberly is back in the same area, definitely dealing with the likable chief Kinbaskit (Kinbasket) of the detached Secwepemc (Shuswap Salish) band there.  Page 54 has the author asking his Native help what provisions he should buy them for their trek back home from trail’s end at “French Creek” somewhere near the old HBC Boat Encampment:

They promptly answered, ‘Tenass pish’ (little fish), meaning sardines.  I told them they would starve on them, but they were bound to have the fish with ‘hiyou grease’ (plenty of grease), and nothing but the fish, so I loaded them up with as many as they could carry, and they departed over the mountains homeward bound, shaking hands with me, saying I was a ‘Hyas closhe skookum Tyhee,’ that is, ‘a very good and powerful chief.’

“My esteemed friend” John Tait, in charge of HBC’s Fort Kamloops, makes a couple of appearances in this book (pages 72, 97).  (Don’t confuse him with ethnographer James A. Teit, who arrived circa 1884.)

Apparently in 1872, Moberly is again exploring this geographical area, accompanied by “Charley, a Columbia-river Shuswap” as well as “my two young Indians, Tim and Johnny”.  During an exhausting, thirsty uphill climb, a stream is found: “Charley jumped up, exclaiming, ‘Chuck–which is ‘water’.”  (Page 79.)  On page 81, the author asks Charley to go hunt up a “cariboo” (mountain caribou) and the latter says “in Chinook, ‘Nika clatawa–quansum mameluce–potlach mika musket;’ or, ‘I go–always kill–give me your rifle.’ ”  On his return Charley reports, ” ‘Mameluce mox’ (‘I have killed two’).”  On page 82, additional young caribou are in the picture, and it’s interesting what the Jargon word is that refers to them: “ ‘Tenass mowick mameluce’–‘The little deer is killed’ “.  This is the well-known word mowich, later to be replaced with the more specific karibu found in 1890s Kamloops-area documents.

I’m curious about another word.  On pages 84-85, boot tracks are found,  “which the Indians at once said were ‘Moneasses’, or men from the east, unaccustomed to mountain traveling.”  Any ideas?

That’s about it for Chinook Jargon-related material in this book.  A family or families of “Iroquois half-breeds” are encountered at Jasper House (pages 88 and following).  We don’t learn about their ways of talking, I’m disappointed to tell you.

At all events, Moberly is an engaging writer and you’ll probably enjoy his book if you’re reading this!

7 thoughts on “Kinbasket’s “Columbia River Shuswaps”, a railroad surveyor, and the Jargon”